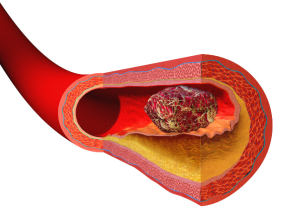 APLS can be a primary, independent disease or part of a rheumatic disease, most often as Systemic lupus (SLE) (about 40%, reference: Koniari I, 2010). Conversely, about 10-30% have SLE (secondary) APLS (Reference: EULAR compendium).

Always inform the laboratory of any anticoagulation use

Risk of blood clots (thromboembolism) is nevertheless increased during pregnancy and in the weeks after birth. This can be before birth attack fetus via blood clots in placenta and thus increased risk of abortion, or the pregnant woman may develop thromboembolism (deep vein thrombosis, pulmonary embolism, stroke).

In the case of thrombosis (thrombosis), heparin preparations (injections) are most commonly used as Fragmin or Klexane. Dosage can be titrated from measurement of anti-FXa activity in blood plasma.

DOAC tablets (Pradaxa / dabigatran, Xarelto / rivaroxaban, Eliquis / apiksaban and Lixiana / edoxaban) are used to prevent blood clots, but none are approved for use in antiphospholipid syndrome. The reason is that both studies and reports indicate insufficient effect in antiphospholipid syndrome at least for «triple positive cases» (as of 2019) (reference Dufrost V, 2016 og Uthman I, 2019). If necessary, Marevan / warfarin is recommended.