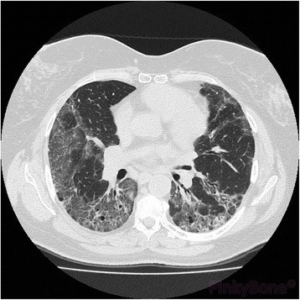 Anti-synthetase syndrome is a form of muscle inflammation (dermatomyositis or polymyositis), but the lungs are the most important internal body being attacked («Interstitial pulmonary disease").

Increasing heavy breathing (dyspnoea), only at load when going up stairs or steep slopes 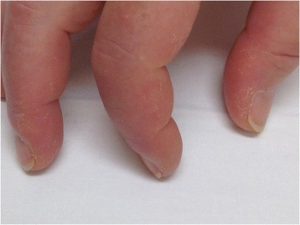 Symptoms of lungs, skin and muscles

It is important to be well informed of the disease, the treatment goal, and about side effects that may occur

Treatment options are depending on the severity of the disease. In case of rapid worsening of the lungs (weeks) it is essential that adequate immunosuppressive treatment is being started quickly. Some serious illnesses show the need for breathing aid respirator (Medical breathing aid) until the medications have an effect.

One can divide the antisynthesis syndrome into three precursors:

Type I is so serious that some people need respiratory treatment (Medical breathing aid) before treatment effect occurs. Death occurs. Particularly in Type II the course is individual. Overall, it is possible to stop the disease at 25-70%, but 6-40% is relapsed for up to 7 years later. For Type III, the medical prognosis is best.

Antisynthetase Antibodies and their Importance to the Disease

Other: ACPA / CCP antibodies that are otherwise associated with Rheumatoid arthritis occurs in 6-9% with anti-synthetase syndrome

Follow-up and controls for antisynthetase syndrome

Under severe immunosuppressive treatment (Sendoxan, MabThera, Prednisolon) the immune system is weakened. Risk of common and unusual (opportunistic-) infections increase, which can be very severe, especially with pre-reduced lung function.

Medical examination, referral to specialist and for journal writing

This page has had 19 visits today