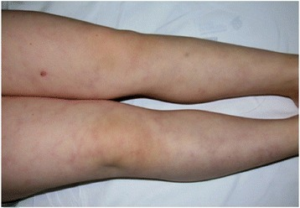 DADA2 (Deficiency of adenosine deaminase 2) is a systemic vascular disease that starts in childhood, caused by hereditary (autosomal recessive) gene defect or mutation in the CECR1 gene on chromosome 22q11. This causes reduced production of the protein adenosine deaminase 2 which affects bone marrow cells.

In 2014, however, the cause of the disease became known and the name changed. The disease can now be classified as one autoinflammatory disease / periodic fever syndrome. The severity varies.

Rare disease of unknown occurrence. Usually affects children under the age of 10. Probably the current focus on the condition will lead to more people being diagnosed in the years to come.