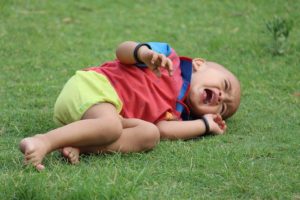 FMF begins in children, most often with many, otherwise unexplained, episodes of fever and pain. Pixabay, CC0

Familial Mediterranean fever (FMF) is an inherited fever syndrome that causes episodes of high fever, inflammation of connective tissue in the abdominal area (peritonitis), lungs (pleurisy), the heart (pericarditis) and joints (Arthritis). The disease is caused by a genetic change that is partly hereditary. The vast majority of those affected are from Turkey (> 40%), Lebanon (16%) and Syria (6,5%) (reference: Mortensen SB, 2020).

Family Mediterranean fever (FMF) is the most common among them Auto-inflammatory diseases / Fever syndromes.

Often debut already in childhood, usually before 5 years of age. The vast majority here got the symptoms before the age of 20. However, it often takes several years before the diagnosis is made. A study from Denmark showed a median delay between the onset of symptoms and a diagnosis of three years, but up to 7 years in some cases.

Autosomal recessive inheritance (disease genes from both parents are required to obtain FMF).

Self-limiting episodes of seizures are most often marked by fatigue. Then follow more typical symptoms:

Preventive (also reduces AA-amyloidosisrisk). Colchicine is started when the diagnosis is certain and should be continued for life.

Most people with FMF can carry out normal pregnancies, but this usually presupposes that treatment with Kolkisin continues. Colchicine is not associated with increased fetal harm, miscarriages and infertility are similar to those reported without such treatment. A survey from Turkey showed that most gave birth to approx. four weeks premature, in week 36 of pregnancy (reference: Yazicioglu A, 2014).