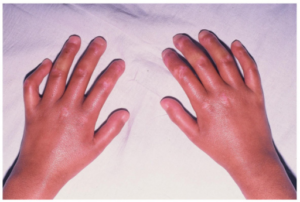 In total, fewer than 10% are under 20 years of age at the onset of illness.

Difference from debut in adulthood:

Disease attacks of the lungs, esophagus, gastrointestinal tract, kidney and Pulmonary arterial hypertension is less common in childhood than among adults

Audio in adults systemic sclerosis is divided into different groups:

Most common form in children (about 70%). Typical symptoms are

Blood tests: About 25% has anemia (low blood percentage), most often due to chronic disease, also bleeding from the stomach («GIFT") may be a cause. Uncommonly, macrocytic Anemia of vitamin B12- and / or folic acid deficiency with reduced intestinal uptake (malabsorption). Some have moderately elevated CK (creatine kinase) when overlapping Myositis. Eosinophilia is present in the blood of 15%.

Compose 20-30% of systemic sclerosis in children.