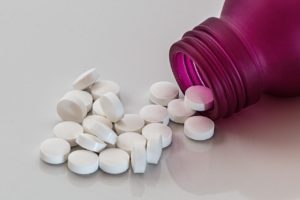 Low-dose naltrexone (LDN) is a drug that in low doses (3-4,5mg / day) counteracts the effect of morphine-like substances. In higher doses, naltrexone is used for the withdrawal symptoms in the treatment of alcoholism and opioid dependence.

LDN should be effective against symptoms  Systemic connective tissue diseases: and other autoimmune conditions such as, for example Multiple sclerosis (MS). However, LDN benefits have not been well documented.

Naltrexone is one antagonist which binds to the opioid receptors in the cells. Theoretically, the brain's absorption of Endorphinate may temporarily be blocked by LDN off. Endorphins are the body's own pain moderator and are produced by the brain itself. This can cause the brain to compensate by increasing its own endorphin production. The result is an increased endorphin level that can reduce pain and increase feelings of well-being. Increased production of endorphins can thus help with pain, spasms, fatigue, relapse and other symptoms, but the mechanism of action and final results remain to be demonstrated.

Naltrexone will also counteract the effects of heroin (which is synthesized from morphine) and has proven useful in alleviating opioid dependence. Public Authorities like the US Food and Drug Administration (FDA) have approved the use of naltrexone for the treatment of chronic opioid addiction and drug detoxification.

Naltrexone is usually prescribed for alcoholism or opioid dependence.
Preliminary studies suggest that low-dose naltrexone may prevent the uptake and dependence of opioids and the drug may reduce withdrawal. The dose is then 50mg / day.

Many, however, recommend more research before the drug is recommended for clinical use.

The drug is currently known most because many have reported effects in the treatment of a variety of diseases such as multiple sclerosis (MS) Crohn's disease, Fibromyalgia, Cancer and HIV, but this has not been supported by clinical trials.

There are no published studies that justify clinical use against rheumatic diseases, but pilot projects have suggested further research.
Claims from anyone that LDN is a "cure" or a "wonder medicine" for many diseases does not come from research, and LDN is therefore considered unproven treatment and should therefore not be used instead of more proven treatments.

US National Multiple Sclerosis Society points out that more accurate studies are required before it can be verified that LDN has a positive effect on MS symptoms or it is at all safe to use.

The British National Health Service has found that there is insufficient evidence for the efficacy of LDN to support the treatment of MS with it, and that such use in the UK would then be unlicensed (reference: Smith, Katie). «What is the evidence for low dose naltrexone for the treatment of multiple sclerosis?». National Electronic Library for Medicines, National Health Service. Visited 24. October 2011).

In Norway, The Norwegian authorities "Legemiddelwerket" (as of 2013) that “this is not an approved treatment and the doctor has a special responsibility to familiarize himself with the available documentation, and on this basis assess the possible advantages and disadvantages of low-dose naltrexone. The most difficult point for the doctor will often be to assess whether it is advisable for the patient to stop ongoing treatment, for example of multiple sclerosis. The scientific basis is too weak for a definite answer to this. Your doctor should be careful to stop other treatments that have an effect on the disease. It may be appropriate to give low-dose naltrexone in addition to other treatments. Regardless of which solution the doctor chooses in consultation with the patient, thorough follow-up is important. Low-dose naltrexone is prescribed by a doctor. The usual dose is 3-4,5 mg once a day. The risk of serious side effects directly related to low-dose naltrexone is considered small. The risk will first and foremost be linked to a lack of effect on the underlying disease ”.

In addition to the well-known scientific use of low-dose naltrexone, there are a number of websites that pose pseudoscientific uses (such as the body's need to increase the preparedness of the immune system) against a wide range of diseases such as cancer, HIV and lupus, among others. according to Steven Novella, a well-known skeptic from the New England Skeptical Society and professor at Yale University School of Medicine, such effects are not supported by clinical research. Novella also believes that the use of LDN to treat diseases with immune dysfunction (eg HIV) and Autoimmune diseases in addition, it may be contradictory, as an improvement in the immune system can actually make such diseases worse. He also writes that there should be warinng mark when claiming to be able to treat a wide range of illnesses that have different causes with a single drug because he believes it will be too good to be true.

Useful to know about LDN

Many specialist departments have chosen not to prescribe LDN, but accept that patients use the drug.