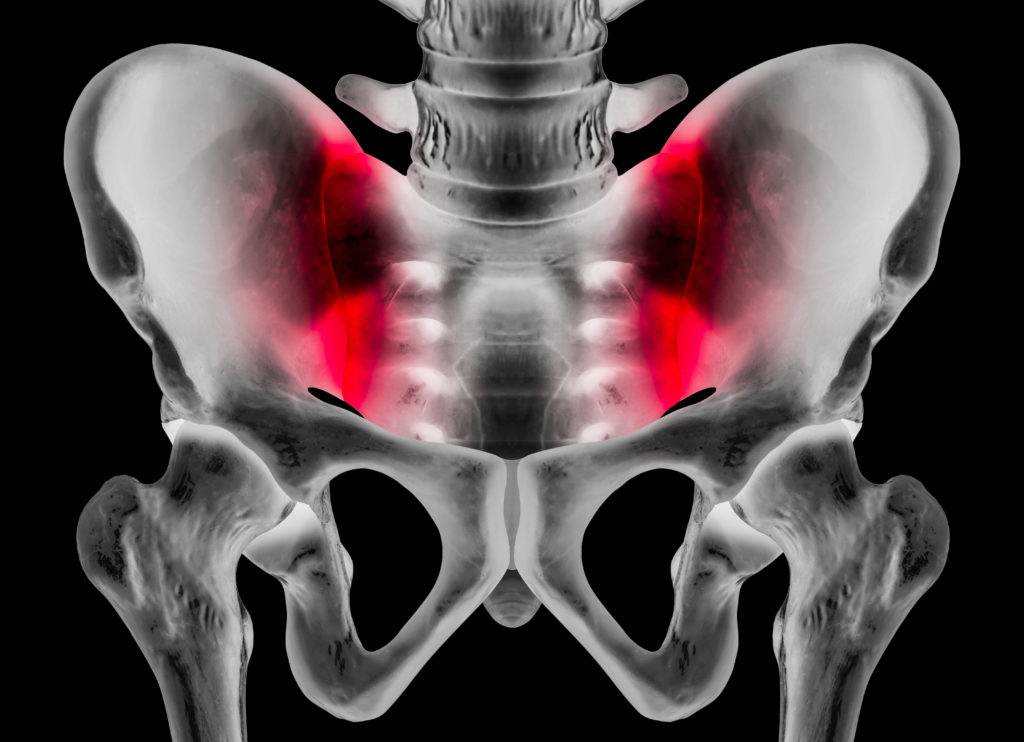 Ankylosing spondylitis (ankylosing spondylitis) is a chronic rheumatic inflammation of the spine and in the joints between the back and pelvis (sacroiliac joints). The disease usually affects men (three out of four are men) and begins at the age of 2030. The symptoms are chronic back pain and stiffness. It is considered among spondyloarthropathies (SpA) together with Psoriatic arthritis, Reactive Arthritis, arthritis by Ulcerative colitis or Crohn's disease) and is almost identical to radiological spondyloarthritis. Ankylosing spine has a known hereditary disposition via the tissue type HLA-B27. The disease starts less frequently in children (usually boys) and is then called entesite-related arthritis which is kind of Juvenile arthritis.

Illustration: Low back pain, mostly in the morning are symptoms of Ankylosing Spondylitis, most often in younger men. iStock.

In the early stages of the disease, most often at the age of 20-30, there is usually "Inflammatory back pain”Which can be defined according to the ASAS criteria (reference: Rudwaleit M, 2009):

However, only about 30% with such symptoms develop Ankylosing Spondylitis (high sensitivity, low specificity).

After prolonged symptoms, most will experience more or less stiffness in the spine. Often, the natural curvature of the lower back is flattened and the vertebral column is curved into a bent position. Pain and joint inflammation (Arthritis) of the hips are also common.

In case of suspicion of ankylosing spondylitis, the mobility of the spine is examined. One measures the lumbar bending ability Schober's test and by looking at the side movement. Reduced movement rash is most often detected. The ability of the thorax to expand when a breathing can be measured by looking at changes in circumference at maximum exhalation and inhalation (thoracic excursion) Also the neck movement is considered. 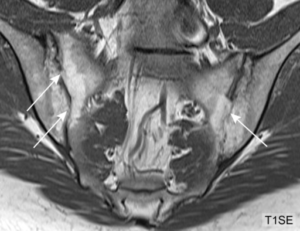 X-ray, CT or MRI examinations are required for the diagnosis. Typical signs of illness appear at the earliest on MRI examination sacroiliac joints (between spine and pelvis), but CT or X-ray changes are considered safer for final diagnosis. Radiological changes, especially MRI results can be misinterpreted. After physical exercise, MRI results may resemble inflammatory changes in the iliosacral joint. Among children, normal growth zones may resemble inflammation, and in old age, natural storage of fat in the joints can also be misinterpreted as inflammation by MRI examinations. After birth, the incidence of MRI changes in the iliosacral joint is high (33%), after 2 years from birth, the same is seen in 21%. Even in women who have never given birth, the incidence of MRI changes is 14% (reference: Hoballah A, 2020). One must therefore never base a diagnosis on MRI changes alone.

Ankylosing spondylitis differs from the spinal cord disease DISH which do not attack the iliosacral joints, are not specifically associated with HLA-B27 (see below) and have a different course of disease.

This type of tissue can be detected in a blood sample and is a hereditary factor that predisposes to ankylosing spondylitis. However, HLA-B27 occurs in approximately 8-10% of the population in southern Norway and 15% in the north. In classical ankylosing spondylitis, HLA-B 27 is detected in more than 95%. If the disease is related to chronic intestinal disease (ulcerative colitis, Crohn's disease) HLAB 27 is present at 73% (reference: Palm O, 2002). At the simultaneous Psoriatic arthritis HLA-B27 is seen at about 50%.

Disease history with Inflammatory back pain (please see above), reduced mobility at examination and radiological changes in sacroiliac joints is essential for a safe diagnosis.

Psoriasis of the skin

Backache for other reasons

No diet is shown to affect the inflammation process, but proper diet can still be useful. Despite the calcification in the back, there is an increased risk of osteoporosis (low bone mass). A sufficient intake of calcium and Vitamin D through the diet has preventive effect. Milk and dairy products are also important calcium sources. Fat fish and fish oil contain a lot of vitamin D and increases the absorption of calcium. If you do not ingest enough milk products, supplements should be considered (for example, Calcigran Forte).

Systematic studies have shown small inflammatory changes in the gut of most people with ankylosing spondylitis. However, few (about 6%) develop chronic intestinal diseases such as Ulcerative colitis, Crohn's disease. Symptoms of such chronic intestinal inflammation are persistent pain in the stomach and intestine (stomach ache), loose stools that may contain blood, weight loss and lethargy. Blood tests may show signs of increased inflammation (blood count / SR and CRP increased). Closer medical examinations are then necessary. Effective drugs help many, but the diet also matters. Nutritionist advice is recommended.

The referral to specialist for possible Ankylosing spondylitis

Recommendations / Guidelines for treatment and follow-up

This page has had 4 visits today