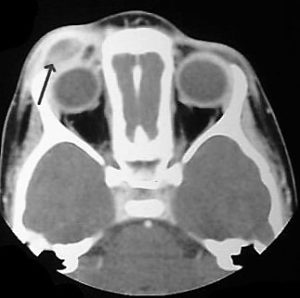 Periorbital tumor of Langerhans histiocytosis. Via Wikipedia. Original from University of Cincinnati. CC BY 2.5.

Histiocytosis is a group of rare diseases there histiocytes (special white blood cells: tissue macrophages) by mistake are stored in large quantities in various organs. Histiocytosis was previously (WHO 1987) divided into three main groups:

Later, it is proposed to be divided into five main groups (reference: Emile JF, 2016).

Histiocytosis is defined as one rare disease.

The diagnosis is made on the basis of symptoms and investigation findings. One uses CT-MR and PET / CT examinations, but the result of tissue test (biopsy) is crucial.

4. "R" (Rosai-Dorfman) group and various forms that do not attack skin