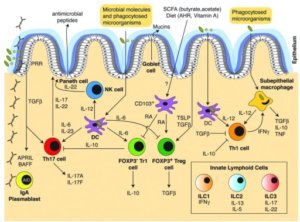 Microbiota is an ecological unit where microscopic organisms live within a limited range. Microbiome is the unifying genetic material that these microorganisms make up. In humans, bacteria constitute enormous amounts of living material that have important health-promoting, but not completely clarified tasks. The vast majority of bacteria are part of the microbiota in our intestines where they together weigh approx. 1,4 kilos.

From the 1990 century, science has increasingly discovered that the composition of microbiotics is important for the development of Autoimmune diseases in animal studies and probably in humans. Thus, can connective tissue disorders, vasculitides, arthritis in adults and in children (Juvenile arthritis, childhood arthritis ) and diabetes in part, be explained by an abnormal distribution of certain bacteria in the intestine. Some intestinal bacteria can increase the risk of illness ("the bad guys") or worsen existing illness, while others ("the good guys") seem to be beneficial.

The intestinal bacteria's significance for rheumatic disease has been demonstrated in animal studies where both laboratory rats and mice fed into a bacterial-free environment remain healthy until exposed to normal nutrition and receive natural bacteria in the intestine. Then occur arthritis and a Ankylosing spondylitis/spondyloarthritis- similar disease (references: Rath HC, 1996, Sinkorova Z, 2008).

Theoretically, the influence of the intestinal microbiota should be a good opportunity to prevent and treat autoimmune rheumatic disease. The bacterial composition of the intestine can be changed in several ways:

So far, development is promising with regard to possible future treatments. Nevertheless, treatment attempts have not been successful so far. The reason may be that we have not yet (per 2019) found the right method to take advantage of the possibilities provided by the microbiota knowledge.