Mitochondrial disease is a complex group of conditions in which the cell mitochondria have reduced function in due to genetic mutations. Mitochondrial diseases are considered among the most common hereditary metabolic (metabolic-related) diseases. The mitochondria are "the cell's power plant" and disease here can cause impaired function especially in the muscles, central nervous system (the brain) and other organs in different combinations, depending on the disease subgroup (different genetic defects, see below). The mitochondria are probably important also in the development of diseases that initially have other causes, such as Systemic connective tissue diseases:, Vasculitis and other Autoimmune conditions (reference: White ME, 2010). Often, the disease starts early in adolescence, but some forms begin in adulthood. Mitochondrial disease can cause signs of unusually severe muscle damage (rhabdomyolysis) after physical exercise. 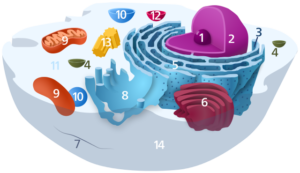 Genetic mutations (Change in heredity) is present. These may be congenital or acquired. Infections and medications can probably cause the mutations.

It is estimated that 1: 10.000 children in Sweden develop mitochondrial disease before school age (reference: Darin N, 2001).

Symptoms and severity vary between the different forms and from person to person. Loss of muscle strength, disturbed vision, hearing, heart, lung, liver, kidney and / or bowel function occurs. Some get learning difficulties and serious neurological and / or mental symptoms.

The number of known mitochondrial diseases has increased in recent years. Among the most common are Leigh syndrome og MELAS (Please see below). Some Mitochondrial Diseases / Syndromes:

Symptoms (muscle pain, cramps, diabetes, heart failure, hearing loss) are important. Custom physical exercise / exercises may be useful. Combination of high doses coenzyme Q10, in combination with creatine and L-carnitine can be tried, but evidence of the effect on such vitamin / dietary supplements is not clear.