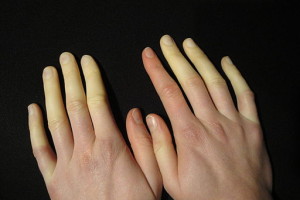 Blood vessel contractions (vasospasm) lead to cold finger episodes due to reduced blood circulation most often in the fingers and toes, triggered by cold or stress. Named after the French doctor Maurice Raynaud (1834-1881).

As many as 8-10% of the population have Raynaud's phenomenon from time to time.

Three stages. Episodes have a duration most often less than 15 minutes:

Occurs without any other underlying disease. Most have had symptoms from childhood or early adulthood.

Occur later in life and may be caused by an underlying disease. The list of possible reasons is long (See Wikipedia here (in Danish)). Among the rheumatic diseases are 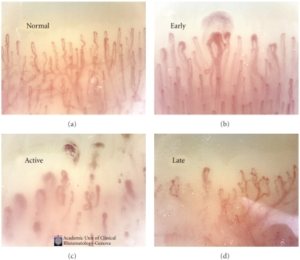 Primary Raynaud's phenomenon usually does not require any drug treatment.

This page has had 14 visits today