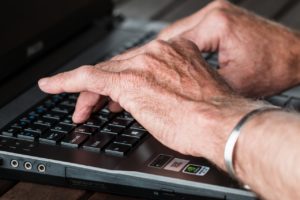 The joint swellings are quite soft to feel, usually easy to distinguish from normal joints and from osteoarthritis which has severe thickening. Blood tests show typical changes (see below). Not everyone has strengths joint pain, but stiffness of joints is common, often before the swellings appear.

Occurrence and causes of illness 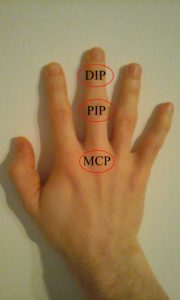 Arthritis affects MCP and PIP joints in hands, but not DIP joints that are attacked by Osteoarthrtitis. Wikipedia. CC BY-SA 4.0,

Climate with changes in temperature, humidity and air pressure is claimed to affect the symptoms: "Weather change, cold and humidity are bad, hot, dry air is good for arthritis"

Without known cause, multiple joints become stiff and sore at the onset of disease. The joints are somewhat hot and swollen (Arthritis) upon examination

The diagnosis must be made by a doctor, preferably a specialist in rheumatology

The number of a group of white blood cells (granulocytes) may become too low and the spleen size increases. This may be a sign of Felty's syndrome or LGL syndrome

Rheumatoid arthritis often results in pain, reduced nighttime sleep, fatigue, rheumatic inflammation / inflammation and reduced physical function. These are the factors they have at their disposal to develop depression. Studies show that about 15% with RA have depression. Early attention to the problem and the implementation of relevant measures is important (reference: Engelbrecht M, 2019)

The lungs are attacked in about 4 - 10%, usually after several years of disease (Reference Kelly C, 2014)

Revma nodules are harmless hard spheres, most often on the stretch side (extensor) of the elbows and over the fingers. They can also occur in lung tissue

Treatment of Rheumatoid arthritis (RA) can stop the disease in an early stage.

Before starting treatment, it is important to be informed about the disease, what the target is, and any side effects that may occur. Blood tests to rule out signs of liver, kidney, blood disease and infection, as well as X-rays of the lungs are common. Need for vaccines against influenza and pneumococcus (pneumonia) are considered.

Data indicate that the need for hip prostheses was 3 times higher and knee prostheses 14 times higher before more extensive use of disease-reducing treatment (most Methotrexate og Biological drugs) began (1996 versus 2011 in Denmark, Reference Cordtz RL, 2018)

Paracetamol (Paracet, Pinex, Pamol and others) is the first choice because the risk of serious side effects is generally relatively small

Swollen joints can be drained and injected with cortisone which has a good effect. Nevertheless, the symptoms will return after weeks - months (recurrence). Cortisone injections are therefore only a supplement to disease-reducing treatment.

Over the first 6-8 weeks stays Prednisone (cortisone) often used, but in fairly low doses (5 - 15 mg / day in a tapering dose). The effect comes quickly (within a few days). Later the dose is reduced.

To reduce the side effects of cortisone in the long term and to reduce joint damage, supplementation with Methotrexate in the form of tablets one day a week or weekly an injection (Metex) . Treatment should begin as early as possible when the diagnosis is made and the risk of serious side effects is excluded as far as possible. The dose is often 15-20mg / week. The effect of Methotrexate is felt after 6-8 weeks of treatment. If doses above 15-20 mg / week are required, subcutaneous / intramuscular injections are considered instead of syringes because these are better absorbed and the effect is therefore better.

There are a number of other drugs that, like Methotrexate, have effects on both symptoms and the course of the disease

Medications such as Remicade, Enbrel, Humira, Cimzia, MabThera, RoActemra are often called "biological". They are designed to block specific parts of the immune system, thereby reducing the activity of the disease. (Reference: Smolen JS, 2015)

If the effect has not been sufficient on methotrexate or other similar disease-suppressing agents (DMARDs) within 6 months and signs of persistent inflammation are found, treatment with biological drugs / bioequivalents (bDMARDs) is considered.

JAK inhibitors are a relatively new group of disease-suppressing drugs in the form of tablets for rheumatoid arthritis. They reduce rheumatic inflammation and the immune system by inhibiting the janus kinase enzymes JAK1, JAK2, JAK3 and to a lesser extent TyK2. This weakens the interleukins (IL-2, -4, -6, -7, -9, -15, -21) and interferon I and II. JAK inhibitors are alternatives to biological drugs (see above). Used alone or in combination with methotrexate (MTX).

When using disease-reducing drugs such as methotrexate, biological drugs or JAK inhibitors, regular check-ups should include assessment of blood tests at least every 1-3. month.

Medicines that inhibit the release of ovarian hormones (GnRH antagonists) has shown promising, rapid onset in research studies led by the Norwegian doctor Anita Kåss (reference: Kåss A, 2015). It remains (per 2019) to see if such drugs become available for approved use except in research studies

Arthritis (RA) contributes to increased risk Atherosclerosis (atherosclerosis) (reference: Dessein PH, 2015). During the course, a heart attack and stroke may occur. In arthritis, optimal drug treatment is important, but risk factors must also be reduced such as high cholesterol (via diet and medication), smoking, poorly regulated diabetes (diabetes) and obesity. High intake of polyunsaturated fatty acids via "Mediterranean diet" reduces the risk of atherosclerosis. Treatment with biological drugs probably has a beneficial effect on atherosclerosis in arthritis (reference: Provan SA, 2015).

"Difficult RA": When arthritis does not respond to treatment

Despite today's good drugs and other measures, the treatment is still not successful in everyone with RA. This is due to several different reasons listed below. Obviously, each individual case must be considered separately in order to achieve the best possible result (Reference: Roodenrijs NMT 2018)

Rheumatoid arthritis varies. Also in the individual, the disease is characterized by good and bad phases. It is possible that a future immunological test will be able to predict flare-up of the disease 1-2 weeks before it occurs, but so far we lack such methods in practice (Orange DE, 2020)

The vast majority have the effect of Methotrexate, which is often perceived as the "gold standard" in treatment. In case of ongoing disease activity, treatment should start as soon as the diagnosis is given, no later than within 3 months. Nevertheless, many will still have active disease that causes pain and reduces physical function in the long run. By adding a "biological" drug, usually a TNF inhibitor (for example Remicade, Enbrel, Humira) or a JAK inhibitor, approx. 70% better treatment effect. Survival after 5 years with RA is now similar to the rest of the population. Smoking worsens the prognosis more in arthritis than expected. 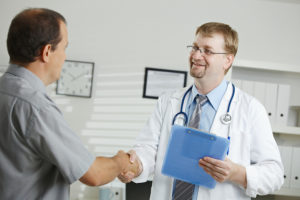 Arthritis needs follow-up and check with a specialist when the disease is in an active phase or the treatment is with special immunosuppressive drugs.

Follow-up by a specialist for rheumatoid arthritis - Arthritis

Regular follow-up by a specialist in rheumatic diseases is internationally recommended for disease activity, progressive disease course or when treatment is given with disease-suppressing drugs (DMARDs, JAK inhibitors or biological drugs).

The role of the specialist is to assess disease activity and signs of side effects. One can not expect patients, GPs and other healthcare professionals to have sufficient competence:

RA disease develops very differently from person to person and the treatment response is also individual. Nevertheless, the course is generally much milder now than before methotrexate and the newer drugs came on the market. This is shown in the fact that the need for joint operations has been greatly reduced among persons with RA.

This page has had 19 visits today