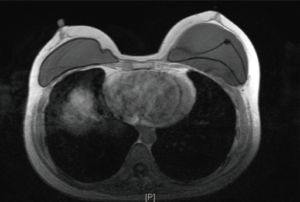 Breast prostheses with silicone has for over 30 years been suspected of causing systemic connective tissue diseases or triggering elevated "Rheumatoid arthritis" (antibody), "Breast Implant Illness". This has not gone unnoticed. In recent years no other medical implants have been studied more thoroughly than silicone-containing breast prostheses. There are now results from major studies with more than ten years of follow-up. The results answer different questions about cosmetic breast prothesis with silicone, although there is still disagreement within the medical community (see ASIA syndromes):

Several methodological good studies have been made and summaries for more diagnoses. These include (dermato) myositis, Systemic sclerosis, Sjögren's syndrome og Rheumatoid arthritis (RA). Most studies suggest in the same direction: No safe relationship between the silicone prostheses and the development of these systemic connective tissue disease.

Silicone implants can increase the risk of activating pre-existing ones Autoimmune disease. Caution is advised if rheumatic disease is present or one has a known disposition for autoimmune diseases

Is there an increased risk of unspecified (undefined) systemic connective tissue disease?

Are newer breast implants safer than before?

Can Restylane and other fillers other than silicone cause rheumatic disease?

Is having silicone-containing breast prostheses associated with an increased risk of relapse in a known rheumatic disease?

Can some people get sick of silicone prosthesis without being registeret in the medical studies?

Breast prothesis of silicone and risk of cancer

This page has had 9 visits today