Spondyloarthritis is a group of rheumatic autoimmune (inflammatory) diseases that attack joints (arthritis) and back (spondylitis). Other characteristics are that some people get one or more swollen fingers or toes in the form of dactylitis, tendon attachment inflammation (enthesitis) and eye inflammation (uveitis/iridocyclitis). In the blood, an increased occurrence of the hereditary tissue type HLAB-27 is seen in some of the SpA subgroups: -Ankylosing spondylitis (Bekhterev's disease) rsuitable as the prototype of spondyloarthritis. Inflammation in the pelvic joint (iliosacral joint) and HLA-B27 in the blood is seen in almost everyone. Psoriatic arthritis, SpA-related to inflammatory bowel disease UC or CD, reactive arthritis (after infections) og enthesitis related arthritis (in children). Udifferentiated spondyloarthritis exists when the medical history and examinations show that SpA is clearly present, but the condition does not fit into the other diagnoses (reference: Dougados M, 2011). The term spondyloarthritis has existed since 1974 when Moll and colleagues defined the condition (reference: Moll JM, 1974). 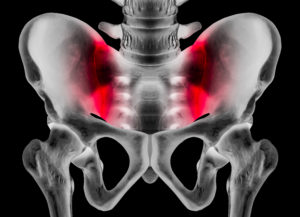 It is estimated that 0,5-1,6% of the population has spondyloarthritis (prevalence), of which Bekhterev's disease and psoriatic arthritis make up the majority of cases. The part of the incidence due to Bekhterev's is highest in the far north (1,6% in Arctic regions) where the hereditary factor HLA-B27 is most common (reference: Stolwijk C, 2016). In comparison, the incidence in southern parts of the globe is only 0,2% in South-East Asia. In southern Sweden, the incidence of SpA in a population study is estimated at 0,45% (reference: Haglund E, 2011). Illustration: Back pain, including in the iliosacral joint, is typical of spondyloarthritis.

Medical history typically ask for symptoms such as signs of joint inflammation, back pain/stiffness, symptoms from the eyes, urinary tract, skin or bowels. Family with SpA (first or second degree relatives).

Imaging with MRI, CT or X-ray examinations often show signs of inflammation in sacroiliac joints (between pelvis and spine) and binflammatory changes in the spine. In early or uncertain cases, MRI images can be easily misinterpreted (please see below).

Made based on symptoms and examination findings

The ASAS criteria. Inflammation of the back/spondylitis is sometimes defined according to the ASAS criteria (reference: Rudwaleit M, 2009) which originally intended to catch patients early after the onset of the disease. Diagnosing early, however, entails such an increased risk of someone being misdiagnosed that the criteria are not used in normal clinical practice. One must be especially aware that only 30% of people with inflammatory back pain develop spondyloarthritis (reference: Wang R, 2018), in some studies even fewer, and that physical exercise and among a number of others who are healthy, MRI images show changes that can be misinterpreted as inflammation (reference: the winter J, 2018).

The treatment options have improved a lot in recent years. Before the treatment starts, it is important to be informed about the disease, what the treatment goal is, and about side effects that may occur. Treatment goals are often to reduce symptoms (pain and stiffness), maintain physical function, minimize complications from the back, joints, eyes, internal organs and the mental burden, but there is no treatment that cures the diseases. The treatment must be adapted to the individual and have a clear goal within a specific period of time.