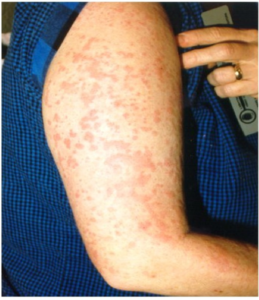 Adult Stills Disease (AOSD) differs from Stills Disease in Children, which is identical to juvenile arthritis (pediatric joints), systemic type, although the conditions have several common characteristics. Still's disease in both children and adults is characterized by daily episodes of high fever, intermittent rash and joint swelling (Arthritis). Some have a less dramatic, chronic and more Arthritis-like disease course. Adult Still's disease typically attacks adolescents and young adults at the age of 1525. Cases in the age group between 36-46 years have also been reported (reference: Owlia MB, 2009). The disease is often classified as a "poly-genetic autoinflammatory disease".

The cause of the disease is unknown, but when Stills disease has started, the signaling molecules (interleukins) IL-1, IL-6 and IL18 elevated in the blood. There is probably a genetic predisposition to develop the disease (poly-genetic auto-inflammatory disease), so that it infects other auto-inflammatory diseases (most often breaks out in childhood)

High fever and arthritis without infection (60-100%)

Et Bright-red ("salmon-colored") eczema which comes and goes in minutes - hours, most often together with the fever peaks are characteristic, but it can be difficult to register

Typical symptoms and findings in medical examinations in the absence of other causes (see differential diagnoses below). Classification criteria can be used, but is not a requirement for the diagnosis. No antibody in blood samples usually turns out, though ferritin in the blood is expected to be clearly elevated by active disease and fever. Fast treatment response (hours-days) using Kineret (anakinra) also supports the diagnosis.

Other diseases with Arthritis or other rheumatic inflammation

Adult Stills' disease clearly has different pathways, so treatment and duration of treatment must be adapted to the individual.

Many pregnancies at Still's disease have been completed, usually with successful results. However, some complications have been observed

The severe inflammation reaction with fever can cause serious symptoms without treatment. During treatment, the majority respond well and can live virtually normal. After a few years the disease usually falls to rest and treatment can be terminated. The arthritis-like shape has a more elongated course.