The reason is most often that the uric acid level in the blood has exceeded a limit. This can happen if the production of uric acid is abnormally high (genetic,or by diseases where cells are destructed) kidney failure or with lifestyle problems with Metabolic syndrome.

Elevated uric acid in the blood does not cause ailments until uric acid crystals are formed, most often in joints. 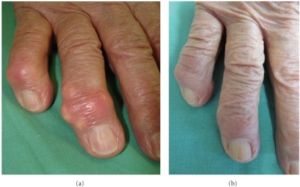 Typical medical history (see above) and high uric acid level measured in a blood sample should lead to suspicion of gout, especially after previous episodes, among older men and in chronic renal failure.

For all medications, the need must be considered against the risk of side effects. Renal, heart and gastrointestinal disorders or the use of ciclosporin (Sandimmun Neoral) may complicate the treatment.

Some foods increase the uric acid level and thus the risk of gout attacks. This is especially true of meat, seafood and alcohol (especially beer, wine is less problematic). Also fructose in fruit juices, apples and oranges can increase the uric acid level. Diet with lots of vegetables and fruity fruit is good. Coffee reduces the risk of uric acid attack. Obesity is unfavorable and weight reduction is recommended. There are several effective drugs that reduce the risk of gout attacks (please see above).