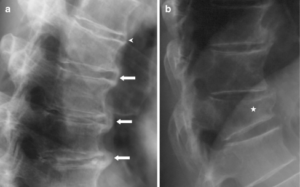 Diffuse idiopathic skeletal hyperostosis (DISH, Forestier's disease) causes chronic stiffness in the back, especially in the vertebral column (thoracic column) in people from 50-60 years of age. In X-ray or CT examinations, bridging calcifications are detected between several vertebrae and over the intervertebral discs. Lumbar columna and neck (cervical columna) may also be attacked in addition to the tendon attachments for Achilles tendons, kneecaps, hips, elbows and shoulders. However, not everyone has pain or other symptoms.

One has investigated, but has not found that hard physical work, consuming a lot of lime, other dietary factors or hereditary conditions are crucial for the development of the disease.

DISH is detected with increasing age and is rarely before the age of 40.

DISH is first noticed as stiffness and back pain, mostly in the morning

The diagnosis is made using X-rays or CT examinations as well as clinical assessment showing reduced mobility in the back.

The treatment is aimed at any symptoms. As with lumbago, the measures consist of adapted physical activity and exercises.

The prognosis is generally good, but increasing stiffness over time results in reduced physical function.

This page has had 4 visits today